Task 1: Starting from discovery of electron, then gold foil experiment, Bohr model and then de Broglie and Heisenberg principle have played a vital role in the development of Quantum model of atomic structure. Explain how developments made in the understanding of the atomic model changed from Bohr till Quantum model? (Word Limit 200, maximum marks 20)

Task 2: Atomic size is one of the most important periodic property of elements in the periodic table. Prepare a report on the effect of atomic size on ionization energy, electron affinity, electronegativity and metallic character of elements. (Word Limit 200, maximum marks 20)

Task 3: DNA is a magical molecule that transmit genetic information from one generation to the other. Prepare a report on the importance of covalent bonding, hydrogen bonding and ionic interactions in determining the structure and stability of DNA molecules. (Word Limit 200, maximum marks 20)

The understanding of the atomic model has had many changes in the past; one such is the change from Bohr till Quantum model. The Bohr model was based on the existence of the microparticles that would comprise the protons, electrons and neutrons. This was also key for the understanding that the energy was associated with the various orbitals and could be calculated when an electron changed position for the orbitals.  Moreover, the model also explained the existence of the electrons in orbitals that were around the nucleus. Contrary, some changes led to the development of the Quantum model that furthered the existence of wave-particle duality. The theory had developed into findings that were considered as infinite. However, the scientist Hans Bethe made a discovery he called the renormalization that explained a phenomenon of “electron self-energy" and "vacuum” (Coolman, 2014). This phenomenon was geared towards the understanding of the infinity findings that were discovered earlier. This led to the disappearance of the infinities that were earlier for the protons and the electrons (Coolman, 2014). However in both cases, there a few things like the existence of the electrons that can be used to calculate the energy for the various reactions.

The atomic size is determined by the sum of the nucleus that mainly constitutes the protons and the neutrons. The atomic number is determined by the number of protons that would also determine the nature of the metallic nature of the material. The metals mainly have a positively charged ion in the event of ionization.  There is mainly the transition and the main metallic blocks that can be seen along with the periodic table (Coolman, 2014). While the metallic elements have distinct masses and also properties like conductivity, the transitional metals have unique properties.  Also, the larger the atomic size the weaker the orbital forces for the orbitals and hence the lower the ionization energy associated with the movement of the electrons (Zhang & Jin, 2017). Contrary the smaller atomic masses have a smaller number of electrons that can have the saturated orbitals ad hence a higher electronegativity. The electronegativity of the elements is determined by the position and the number of the valence electrons that are ultimately affected by the size of the molecule. The saturation of the orbitals would also determine the nature of the bonds that the elements can form with other material’s in a reaction.

DNA has completely changed modern-day science. The DNA constitutes of complex bonds that are covalent and hydrogen bonds in mature. The hydrogen bonds are generally weaker bonds that are easier to dissociate. The covalent bonds are very strong and therefore would form stronger inter-atomic bonds. The earlier observation by scientists; Watson and Crick led to the discovery that the DNA has two strands. The stands are interconnected through a twist like a ladder. This will determine the composition through the number of atom molecules that would combine at the molecular level. As for the terms of the Hydrogen bonds, the DNA forms relatively weaker bonds that would be easier to break down hence lesser ionization energy would be required. The hydrogen bonds between phosphates cause the DNA strand to twist. Hydrogen bonds, for instance, exists between the phosphates in the DNA molecule that causes the resulting twist (Zhang & Jin, 2017). Since the bonding between the layers of the Similarly, the use of the weaker bonds would also mean that the stability of the bonds would disintegrate when the conditions such as temperature would be altered. This means that the DNA results can have alterations when exposed to extreme environments.

Glassware is considered as a vital part of the modern use material. The glassware offers other unique features that include transparency and light filtration. Glass can filter out some spectrum of light that would not be suitable at a given time like the Ultra Violet spectrum in some cases for reactions. 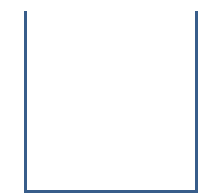 The use of glass for the beakers are vital part in the labs and are basically used for the mixing of the various chemical regents. The clear glass gives clarity to the design while the glass also takes advantage of the inert nature of the glass such that void reacting with the reagents. The use of glass that has a lower ennisivity would make the storage be suitable for storage of chemicals that have higher rates of dissociation, especially when exposed to sunlight (Rasmussen, 2012).

The pipettes are used for the titration purposes mainly to contain the reagent mainly alakaline solutions. The adition of the reagent involves the sucking using the mouth with a smaller sunction pressure. In this case the clear cgas is used to monitor the nature of the reagent for contamination and also for the level (National Academy, 2000). 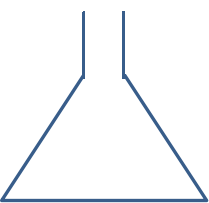 The conical flask is also used for the mixing of the reagents, however, with the design of the long thin neck, it has an easier handling for the hot or oxothermic reagents. The huge base design for the glass gives an elaborate surface area that would be suitable for the reaction of the various compounds that are to be reacted together. Also, the design can be corked (covered) for the case of the gas emissions (National Academy, 2000).

Burettes are used for the  placement of the acidic solution in a titration experiement. The burretes have the unique longer elongation that will allow for the smaller base are and hence does not hold much. Also, the use of glass offers a non-corrosion aspect of the glass especially for the more dangerous and concentrated solutions of the acids.

Finnaly, the measuring flasks are sued for the measurements of the various fluids as the name suggests. The labels on the glassware that would be done using a visible ink that is water repellant in most cases (Bos, Louter, & Veer, 2008).The use of the glass would also give the easier handling.