Question: You are an Epidemiologist in your country’s health ministry and have been asked to speak at a conference for Environmental Health Practitioners in your local community. The theme of this year’s conference is “Air pollution in a changing world”, and you have been tasked to highlight the “health effects of air pollution” to the conference participants. In a maximum of 1500 words, please address the following:

1. Write a research question using the task that you were given by the conference organisers (Be specific with your question).

2. Conduct a systematic review of the literature based on your research question, and the task provided using the following subheadings: i. Describe the search strategy – use at least three citation databases  ii. Summarize the results of the studies found iii. Is there any plausible biological mechanism in the research question? iv. Identify and comment on gaps in the evidence and propose a pathway for further research

Assignments that do not conform to the template provided will not be marked.

Marking Criteria Not for dissemination Not publishable Publishable with extensive revisions

Publishable with some significant revisions

Is excessive use of automobiles increasing the risk of development of COPD in children less than 5 years of age?

WHO studies show that 84 percent of the children in the world under the age of five years are in constant risk of development of COPD, because of the deteriorating global air quality. An estimated number of 600,000 children died at birth due to acute respiratory infections caused by polluted air (Lim et al., 2017). New findings from the World Health Organisation state that, pregnant women when exposed to polluted air are more likely to be involved in premature childbirth. This causes the child to be born small and have less weight than an average healthy child. The impact of air pollution includes but is not limited to neurological implications as well as the cognitive ability and also can prompt COPD as well as childhood cancer.

Contact to air pollution can lead to the development of cardiovascular diseases later in their life and can be at an increased risk of developing other chronic diseases (DeVries, Kriebel and Sama, 2017). Primary reason children have high affinity to develop illnesses due to air pollution rather than an adult is that children breathe more quickly than an average adult and hence absorb the air and the pollutants present in the air much faster.

Some key findings by WHO are:

Air pollution affects the development of neurological functions leading to adverse effects on cognitive ability and also concerning the motor ability of the children.

In the under developing countries, 98 percent of the children under the age of five either died during childbirth or developed chronic diseases such as COPD.

Children are profoundly affected by fine particulate matter of 2.5 levels, which are above the WHO guidelines for good air quality. The study was conducted by WHO on an estimated 2.5 billion children among which 630 million children were under the age of 5, and the rest were within the age group of 6 to 15 years.

The study also found that more than half the number of cause of air pollution leading diseases and deaths was caused due to vehicular infection.

Air pollution is aggravated in the countries with rapid economic expansion, increased industrialisation and increased traffic among others (Lopez-Campos, Marquez-Martin and Soriano, 2016). Vehicular emissions are of specific concerns in these countries which have the maximum impact in the deterioration of the air quality thereby impacting the respiratory health of children.

The number of vehicles in the world has increased from 37.3 million in 1997 to approximately 1 billion in 2018 that is almost 30 percent increment. The significant increase in the number of vehicles being operated in the world has left a drastic impact on the air quality of the world.  As of 2017, the top most polluted countries due to vehicle emissions consist the under developing countries such as Pakistan, India, Bangladesh in Asia and other Gulf countries such as Qatar and UAE. The average concentration of the particulate matter in these countries is PM2.2, which is considerably higher than the ambient air quality index put up by WHO. The air pollution is mainly caused due to carbon emissions from cars as well as traffic. 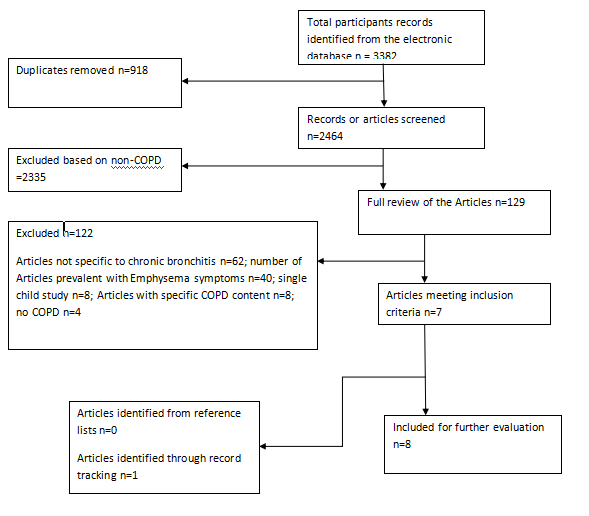 Summary of results of studies found

COPD or Common Obstuctive Pulmonary Disease is a common disease occurring in the lungs which makes the lungs hard to inhale or to exhale. There are two types of COPD; they are Chronic bronchitis and Emphysema (Van den Berge and Aalbers, 2016).

The recent information on genes and the toxicological studies provided evidence that predisposes towards the growth of COPD suggests - COPD is a complex disease caused due to the variety of compositions (Aguiar et al., 2019). The epidemiological evidence is quite convincing regarding the associations between COPD and ambient levels of air pollution due to vehicles which are prevalent to the children. The meta-analysis of the group studies found a relationship between COPD with vehicular pollution among children under the age of five years. Based on the evidence pertaining to the UK’s medical committee of air pollution concluded the fact that the overall evidence is reliable with the apparent possibility that air pollution caused by vehicles might play a significant role in development of COPD in children with their homes close to busy roads (Goldizen, Sly and Knibbs, 2016).

Gaps in the literature and future research directions

The issue of vehicular pollution causing COPD in children is complex and has many questions unanswered. Firstly, the identification of the point of time, when a once healthy child becomes COPD is difficult. In epidemiological studies, the functioning sense of an incident of COPD is in terms of the episode of the first or recurring wheezing attacks over some time or the primary diagnosis of the doctor. Secondly, these descriptions are subject to alternative explanations which are mechanistic in nature. One is where the incidence of COPD is the result of exacerbations or the symptoms in children with existing medical conditions. Another important mechanistic explanation is the representation of the effects of COPD of multiple fundamental mechanisms responsible for the involvement of the underlying state of COPD (Berton et al., 2017).

Future research directions should include harmonised efforts to reduce the infant mortality rate due to COPD. The regional and national COPD relief programmes in the Netherlands, Portugal, Turkey, and Poland are significantly valuable and should be used as a basis to develop new state level as well as national level paediatric programmes. Necessary investigations should have to be made to understand the daily interactions between patient's COPD as well as their environment. There is more study required on the function of environmental factors on management of COPD in children in long-term (Zaidan, Reddy and Duarte, 2018). Research into different phenotypes of COPD and their long term impacts should be united with companion analytics as well as understanding of the effect of varying long term treatment on children such as vaccines, anti-viral treatments, as well as anti-inflammatory.