In other words, the cost of producing a commodity is the quantity of another commodity that must be given up or sacrificed, given a particular combination of various resources or factors of production.

Cost and Profit is computed by accountant as well as an economist. However, there is a difference in the manner in which each of them calculates a cost. For this, we first need to understand Accounting Profit and Economic Profit concepts:

We all know that profit is total revenue that remains after subtracting total costs. However, profit will differ if cost is calculated differently.

To illustrate further, let us take a hypothetical example where Chef Steve has a well-known restaurant that serves Italian food. Apart from this, Steve is also a qualified gym trainer and can easily earn $10/hour if he starts giving training classes to people. Let’s say, in a month Steve’s restaurant did very well and he earned $5,000 by putting in 250 hours in the month. His costs for making food, salaries etc. amount to $1,500 for the month.

Now, in this case:

The Opportunity Costs theory can also be presented graphically through a curve popularly known as Production Possibility Frontier. The curve represents choice between two commodities which are presented on either axes (x axis and y axis). Given fixed quantity of various factors of production, the individual or economy needs to choose between units of the two commodities that can be produced.

For example, let’s say an economy needs to produce shirts and bread. With the fixed resources economy has, it can produce these two commodities in following combinations:

Graphically, this can be presented as follows: 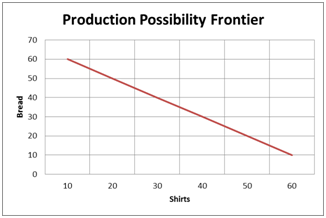 The red curve in above graph indicates maximum capacity of an economy, given the fixed factors of production. Hence, there are various combinations of bread and shirts depicted on this red curve. For example, 60 bread and 10 shirts or 30 bread and 40 shirts and so on and so forth. The economy will try and produce a combination that caters to needs of its people in an optimum manner.

The shape of PPF curve can be categorized as follows:

Francis Edgeworth developed this concept but Vilfredo Pareto was the author of the indifference curves as we know them today. 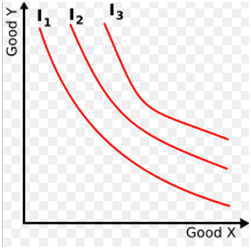 Hence, in above figure a consumer on I1 curve is indifferent at any point on the curve, However, as the capacity of economy increases, more goods can be produced leading to higher level of satisfaction and utility. The curve itself will shift to I2. In this case, a consumer will prefer to be on I2 instead of I1 as it provides higher satisfaction. But along I2, again the consumer is indifferent. Similarly, I3 is preferred to both I1 and I2.