The ideal way to depict the relationship between two quantitative variables is via Scatterplot . It is also known as scatter graph, or scatter diagram.Measured on the same individuals, it portrays the relation between two variables. Here the axes of a graph are use. Cartesian coordinates are plotted to display values in a data set. One variable is depicted on the vertical axis and the other on the horizontal axis.Values of both the first and second variable for an individual is plotted and depicted as point. They can be colour coded. In most case, we are aware if the nature if the variable (whether its explanatory or response), it best to plot explanatory on the horizontal axis calling it x and the other (response) variable y . This can be depicted in the Example below where we use the height and weight of 10 people.

Buy putting in the values in the SPSS software we get the following scatterplot: 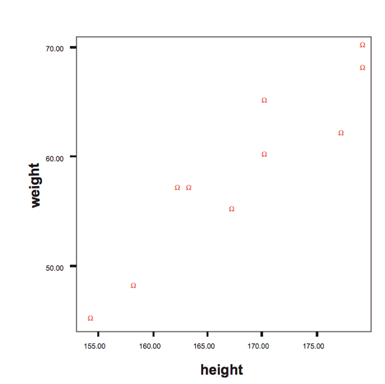 For the sake of understanding the above scatterplot, we need to analyse the pattern all over. It should be able to reveal the following in the form of a pattern: strength, direction and form.

What is important is the Linear relationship of both the variables. This occurs when a straight line is formed due to the points plotted. There can be clusters and curves as well. A trend lien which is basically the best fit line is used for both variables to study the relationship between them. This done through linear regression which gives the best solution in time.

In the same way, the proximity of the points from each other on the scatterplot can depict the strength of the relationship between the two variables.

To understand the strength of the scatterplot quantitatively , we use the correlation coefficient. The scatterplot depicts the relationship between two variables graphically in a data set which is bivariate . Most of the scatterplot cases show points forming around a linear line. This linear relation can be quantified through a measure numerically.

There are many different types of correlation coefficients both of which with different utility and characteristics.

Formally, it can be defined as: “The sample correlation coefficient, denoted by r (or in some cases rxy), is a measure of the strength of the linear relation between the x and y variables ” 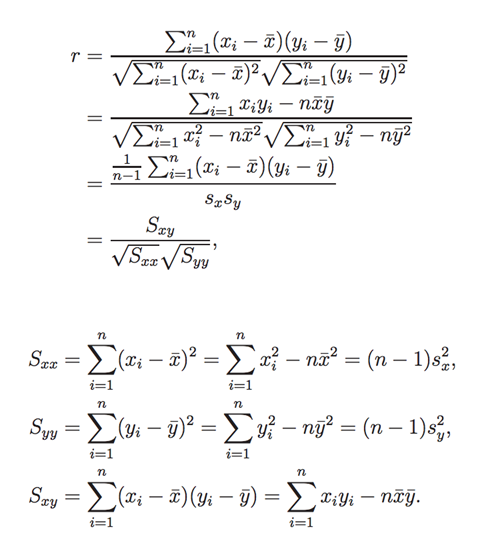 This will result in the correlation coefficient being:

To find yield in SPSS between weight and height, we get the following table : 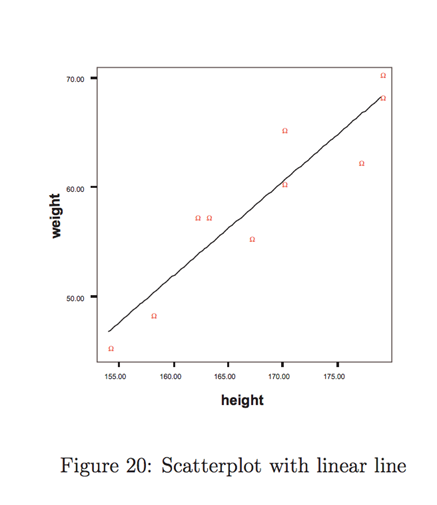 A correlation coefficient has a number of features that are important :

Moreover, just because two variables have a high correlation and have strong association, it doesn't necessarily imply that they are causally related as well. Due to lurking variables, both the variables will be strongly correlated due to their respected association with other variables. This leads to changes in identification.